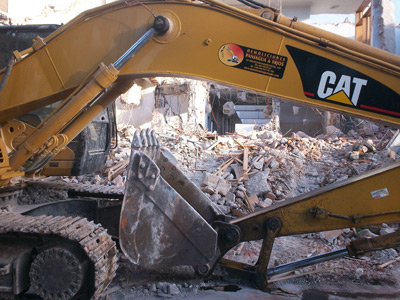 Plans had been put in place to use the old University of Ulster Catering College site for parking during next years Open Golf Championship. These plans have been disrupted due to potential asbestos contamination concerns at the site. In 2009 – 2010 the old catering college was demolished as it was deemed surplus to requirements. There were plans to use the area for parking next year during the tournament.

Recent air testing has been carried out and the levels of asbestos fall well below the safety criteria required for any urban area which was welcome. Ulster University stated that before demolition, Full asbestos removal was completed by a licensed contractor. The Health & Safety Executive was also informed of the works.

Ulster University are also going a step further and arranging a supplementary review of the site by a specialist consultancy.  They confirmed that there were no plans to use the brownfield site for the Open Championship next year.

After including the 10 acre site in the initial transport plan during the tournament, the council abandoned plans to use the site. They told the Coleraine Chronicle that they were considering “numerous permutations” when asked about the rejection of the site.

Ulster University told Councillor Mark Fielding that they are having  the supplementary review of the site completed by specialist consultants which was a welcome development.

You can read the full article from the Coleraine Chronicle here.

We offer asbestos surveys Northern Ireland wide. It is very important to survey any building for asbestos before demolition or refurbishment works. This means that anyone working on the project will know if any asbestos is present and where it is located. It will also advise for removal if deemed a hazard to users. When an asbestos survey is complete we will rush any samples taken to a UKAS accredited lab here in Northern Ireland. A full plain English report will be written detailing everything you and the contractor needs to know.